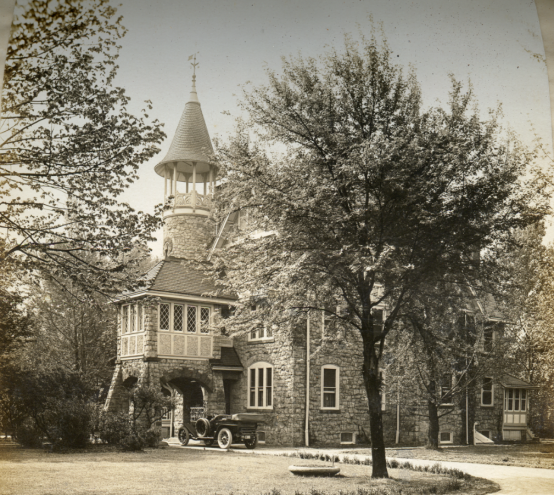 The palatial home of Philadelphia brewer, John F. Betz, was built some time between 1880 and 1890.  There are no accurate accounts of how many rooms it held, but its opulence was legendary. The huge rooms were graced with hand carved mantels brought from Germany and stained glass windows of amethyst and gold that bathed the oriental carpets with rich light. From the tower and from several balconies on the upper floors, inhabitants had a commanding view of the Schuylkill River and of the farms that became Valley Forge National Park.

On the grounds of the mansion John F Betz had an arboretum planted with a variety of trees not native to the area. At least one of his Ginkgo Biloba trees is still growing in the wooded area near St. Theresa of Avila School today.  There was also a large green house and conservatory next to the mansion. Part of it survives today as the Petit Cherubs Day School.

Even before Siegmund Lubin purchased the Betzwood estate, the heirs of John F. Betz permitted Lubin to make films there. At least one film, The Fountain of Youth, is known to have been made in the conservatory in 1911. Once the property was transformed into a movie studio, it was not unusual for exterior shots to be taken all around the mansion and on its grounds. Portions of the building can be glimpsed in the 1914 film, Michael Strogoff, or the Courier of the Czar.

While Lubin preferred to spend his summers at the shore near Atlantic City, he did occasionally spend days and even weeks in residence at the Betz mansion where he kept two electric cars for his personal use. Important celebrities of the film world sometimes visited him there, among them Mary Pickford, Marie Dressler, and Vitagraph film producer, William T.  Rock.

After Lubin was forced into bankruptcy in 1916, his son-in-law, Ira Lowry, made a World War One propaganda film–For The Freedom of the World–at Betzwood in 1917. With the studio processing plant closed, the film was edited in the Betz mansion. One woman, former studio employee, Ida Breuninger, single handedly assembled the entire film by hand in a non-stop marathon session that lasted over three days. She remembered Ira Lowry going into the mansion’s kitchen to make her pot after pot of coffee.

During the years 1918-1922, when Wolf Brothers, Inc., owned and operated the studio as the Betzwood Film Company, members of the extended Wolf family spent summers in the mansion. However, in the years after the studio closed, the mansion went through a number of changes. It was a hotel and restaurant for a while, then rented out as apartments.  Slowly but inexorably the huge mansion fell into disrepair. By the 1950s it had become such a burden to its owners that it was finally closed up and left unoccupied. Looted and vandalized, it was widely reputed to be haunted. Finally, in September of 1962, the derelict mansion was demolished to make way for the building of St. Theresa of Avila parochial school. Local newspapers lamented the loss of a legendary local relic of the silent movie era.