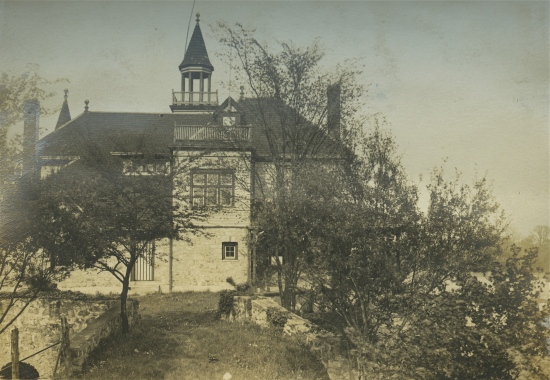 The Alexis Club boathouse on the Schuylkill River.

The Betzwood studio was anchored at the southeastern-most corner by a huge Victorian boathouse called the Alexis Club that sat at the north end of “Catfish” dam on the Schuylkill River. Like the Betz mansion on the hill, the boathouse was capped by a tower that permitted a panoramic view of the river and the surrounding landscape.  A wrap around porch that extended out over the water made it possible to fish and created a pleasant place to sit and enjoy the breezes and the rushing sound of the water going over the dam.

Perhaps the most surprising feature of the boathouse was that deep beneath the structure there was a water-powered turbine that generated electricity.  While the origin and original use of this feature are unknown, during the days of the studio, the electricity generated in this way powered the lights in the “dark” studios.

Perhaps because the opulent Betz estate represented an embarrassment of riches, the studio does not seem to have made much use of the clubhouse or to have exploited its wonderful setting.  Only one reporter who visited the studio ever mentioned it in an article. He was informed that it would soon contain apartments where “bachelor friends of Mr. Lubin” could stay when visiting the studio. However,  the only documented use of the elegant building was as a bunkhouse for the rowdiest and grungiest of the studio’s personnel—the Betzwood cowboys.  Based on Albert Hackett’s description of the night he spent sleeping in the bunkhouse and his tales of the cowboy’s questionable hygiene and their habit of spitting tobacco juice everywhere, it is safe to say that the ambience of the clubhouse was probably comprised to some extent by its being used as a bunkhouse.  With a turbine spinning below the floor, it may not have been the quietest place on the grounds.

View of Catfish Dam from the boathouse.

Like the Betz mansion, the Alexis Club did not fare well in the years after the studio closed. In fact, it seems to have been abandoned in the 1930s, and was demolished sometime around 1945-1950. The dam was removed when the Corps of Army Engineers dredged the river. Today, only a fragment of the dam can be seen on the opposite side of the river.