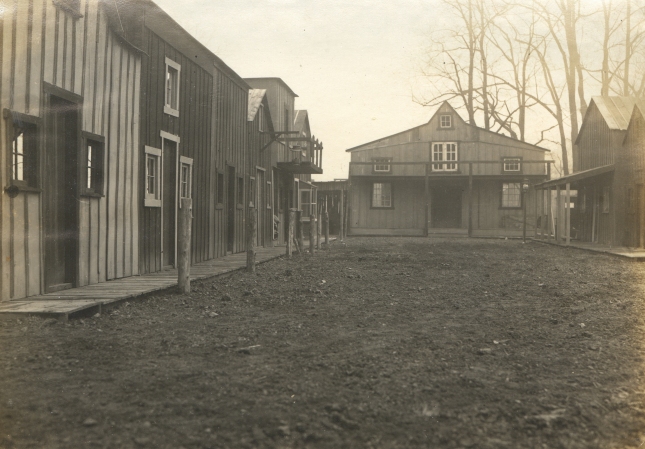 A view along the street in Betzwood’s western village set.

The first westerns filmed at the Betzwood studio used the now-vanished village of Port Kennedy, just across the river, as a “western” frontier town. Directors put up “sheriff” and “saloon” signs on the old buildings and started shooting–in every sense of the word–often without asking or telling the local residents first.

By 1914, however, the Betzwood studio boasted its own authentic looking western village, a series of wooden facades on metal frames, which could be rearranged to suit directors’ needs.  The fact that a permanent set was built for the filming of westerns reflects the importance of “Cowboy and Indian” films in Lubin’s repertoire.

The western set was used not only by the Lubin company, but also by its successor, the Betzwood Film Company, which took over the facilities in 1918 and made a series of feature-length westerns starring Louis Bennison. Eventually the set was used one last time–with signs in Russian–as a Jewish Shtetl in the final feature made at Betzwood in 1922: Breaking Home Ties.